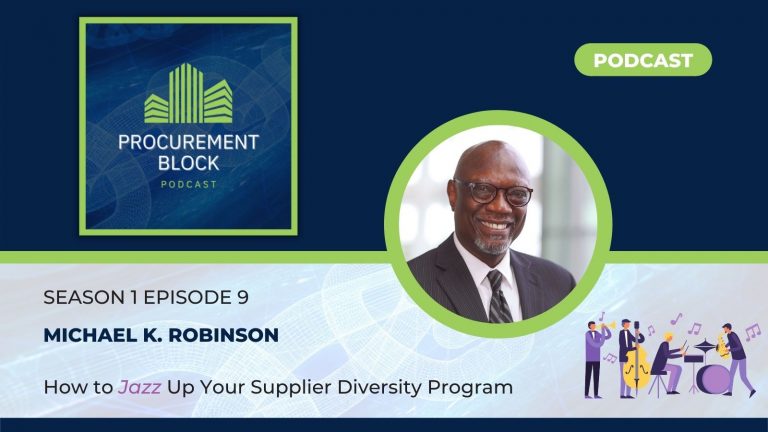 In this episode, Michael K. Robinson brings his wealth of knowledge and experience to our conversation on supplier diversity. He explains how to jazz up your supplier diversity program by understanding the benefits, how to identify and attract diverse suppliers, and what to take into consideration when implementing or expanding a program.

Michael K. Robinson is Program Director, Global Supplier Diversity for IBM’s Integrated Supply Chain. He is responsible for leading IBM’s supplier diversity initiatives worldwide. In this role, Michael, and his team, focus on the utilization, development and mentoring of diverse suppliers who can provide value-add to IBM’s Supply Chain.

Live at the Bijou album

April Harrison is the Marketing Director for Trust Your Supplier, an innovative supplier information network built on blockchain technology. April’s background includes real estate and teaching. April received her degree in Psychology and History from the University of North Carolina at Chapel Hill.  Notice what’s not in her background? Procurement!

April has been enjoying Michael’s recommendation of Grover Washington’s “Live at the Bijou" album. It has really "jazzed" up her afternoons (cue the drum fill)!

Music by jorikbasov from Pixabay

Procurement Block is produced by Trust Your Supplier

This website uses cookies to improve your experience while you navigate through the website. Out of these cookies, the cookies that are categorized as necessary are stored on your browser as they are essential for the working of basic functionalities of the website. We also use third-party cookies that help us analyze and understand how you use this website. These cookies will be stored in your browser only with your consent. You also have the option to opt-out of these cookies. But opting out of some of these cookies may have an effect on your browsing experience.
Necessary Always Enabled
Necessary cookies are absolutely essential for the website to function properly. This category only includes cookies that ensures basic functionalities and security features of the website. These cookies do not store any personal information.
Non-necessary
Any cookies that may not be particularly necessary for the website to function and is used specifically to collect user personal data via analytics, ads, other embedded contents are termed as non-necessary cookies including IP addresses. It is mandatory to procure user consent prior to running these cookies on your website.
SAVE & ACCEPT